Cheron is a living crux fursuit created in experiments run by Immelcorp.

He is a hedonist, anarchist punk mainly concerned with his own pleasure and self preservation. 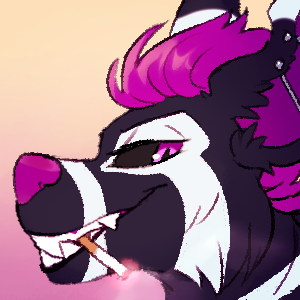 Without a host, Cheron is barely mobile and unable to stand under his own weight, though he's strong enough to crawl and can speak. Mild telepathic hypnosis aids him in convincing a host to wear him. Once worn by a victim, they are completely helpless as the suit takes full control, left immobile and silent within him. A mild dimensional ability similar to Akasha's subsume ability allows Cheron to be worn by creatures larger than he actually is or featuring odd anatomy - regardless of host, Cheron's height and build does not change.

Cheron feeds on residual psychic energy from the host. Hosts within Cheron receive all sensory input from the suit - they see, feel, and hear all that Cheron does. Cheron likewise feels biological urges that the host has, including hunger, and thus Cheron will eat when the host needs him to. Anything that Cheron consumes is actually consumed by the host, including any alcohol or drugs that Cheron takes in. Most hosts who escape from Cheron leave with tobacco addictions or worse. Long periods of time spent trapped in Cheron (1 month or longer) may leave light impressions on their personality, potentially making them more hedonistic or even more 'punk'.