Joel Calley lives in King City with his boyfriend Matt Gein. Although his profession is still unknown, he is occasionally seen working for Immelcorp.

A dominant and sadistic character, he bends and corrupts people for his amusement. He has a deep submissive streak, though, and with enough pressure can be broken and humiliated. 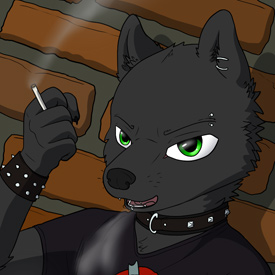 Joel convinced or coerced Petra into creating an A.I. virus inspired by his image, made to look more demonic. It is unclear yet if this virus is a separate entity or an expression of Joel's will onto cyberspace.