The Kryss are a civilized race of Xenomorphs currently exploring the galaxy.

It is said that the dangerous species Xenomorph XX121, sometimes known as the Kiande Amedha by certain interstellar hunters, needs only one species to survive on a planet in order to spell doom for its native inhabitants. This was the fate of a colony world in the outer rim planet of HD 88104 - all it took was one egg, smuggled in for resale by a space pirate, to spell the end of each human on the small, rocky world. With no messages sent to the outside galaxy, no help would ever come. An entire planet easily fell to the spread of this monstrous race.

By the time this forgotten and isolated world was rediscovered by researches, they found much had changed. The xenomorphs walked upright, dressed in mismatched clothing. They spoke in a soft language of hissing and chittering. Researches and their lightly armed companions were not met with fierce, dangerous monsters - they were greeted by curious, friendly individuals. Isolated for decades with automated factories, food farms, and a complete lack of their normal source of reproduction, the xenomorphs, perhaps through a quirk of genetic mutation or the powerful hand of some unknown influence, had civilized. They had evolved language and culture. With no apparent knowledge of the reputation of their own species, these dark, eyeless “monsters” called themselves the Kryss - simply “the people”, in their language. 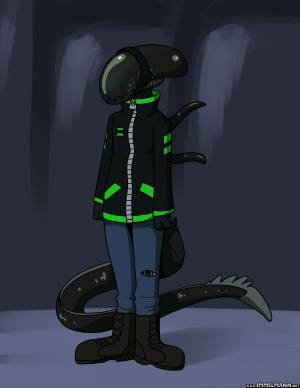 The acidic chemicals within the Kryss allow them to digest many materials for nourishment including solid metal and stone. This acidity also makes their blood a very dangerous substance when injured. Kryss can consume the more traditional food of other species, but their higher caloric needs often aren't met this way.

Adult Kryss drones are, on average, between 2 and 2.5 meters tall. Queens sometimes reach a height of 4 meters and are considerably heavier.

Necessity and random mutation have distanced the Kryss from their original parasitic form of reproduction. The traditional “hive” structure of drones and a queen remains, but no outside host is necessary - drones, upon reaching maturity (which takes roughly 20 human years), directly fertilize eggs laid by the queen.

The Kryss had limited access to records and media found in the original colony infested by their ancestors. With no way to learn human language, they could only guess as to the meaning of words and the lyrics of songs. Their understanding of culture and art is thus a patchwork of misinterpreted symbols and concepts.

A lack of meaningful context to ideas like binary gender means the Kryss sense of fashion is highly variable and androgynous, with individuals mixing different styles with no regard to original intent.

When the Kryss were introduced to the galactic stage, they were also introduced to stories of their ancestor species - a savage, parasitic predator known to wipe out entire colonies. Although considered largely eradicated, they were known to still be a threat in some remote regions.

It took a considerable amount of time for the original Kryss diplomats to make peace with the interstellar community, and fighting the prejudice of their race is still an uphill battle for many. Some Kryss are raised not knowing about their own reputation, but many are well educated on the horrors their race one wrought, if not as a way to understand the hatred against them than to, perhaps, prevent any resurgence of predatory instinct.