Petra Dyatlov is an IT technician for Opal Genetics. He is a gamer and sci-fi fan in his spare time.

While working for Varo Robotics, he has worked on several advanced AI projects and was responsible for the creation of Joel's virus form.

Although he prefers females, his susceptibility to hypnosis frequently leads him into gayer situations.

His gryphon species allows him to transform into an elf form, although the mechanics and triggers of this transformation are not yet understood. 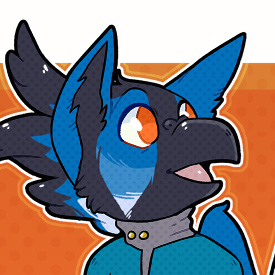 Petra was originally designed by lexorians and was bought as an adoptable. His bird half is inspired by the Black-throated magpie-jay.