Alaire LeVasseur is a chef living in King City, working at the Indigo Lakeside restaurant. He was born in the southern city of Rockport where his three older sisters and one younger brother still live.

His spare time is often spent indulging in full ABDL lifestyle. At some point, he was castrated willingly (though under strong sexual pressure). 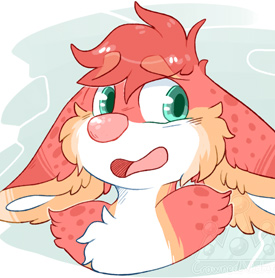 Alaire was originally designed by CrownedVictory and bought as an adoptable.