Carrie Fiore is a highly trained (and unlicensed) surgeon and owner of the eponymous Carrie's Tattoo and Bodymod Dungeon in King City. She and her staff offer a wide range of body mods, ranging from tattoos and piercings to more extreme (and barely legal) practices such as castration and amputation. 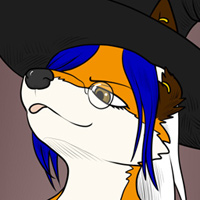 Carrie graduated medical school and worked two years as a plastic surgeon before being disbarred for “unethical practices” (mostly related to a series of castrations done to willing patience without first going through the proper bureaucracy). It is only due to lax laws of King City that she was able to open her bodymod business.

Carrie first appeared in Concession as a randomly-generated background character. She also owned a tattoo and piercing shop in the comic and appeared in several strips at this location.