Aaron “Nicole” O'Connor originated in the webcomic Concession. Despite feminine clothing and a female nickname, Nicole identifies as male.

In the context of King City, through currently unknown means, he became obsessed with his own image and has acquired the ability to transform others into near identical clones of himself. He works a secretary for his father's company, a trans-national transit system which operates the subways and buses of King City. 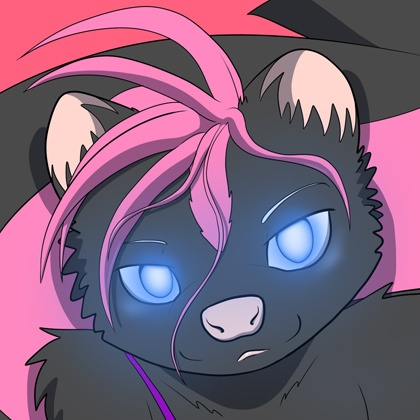 With prolonged physical contact, Nicole can transform any sentient, humanoid, living person into a clone. Ideally, the clone becomes an exact copy both physically and mentally. Often some remains of the original identity remain such as gender, personality quirks, or hair styles - results vary.

The clone maintains all knowledge and memory of his past life and remembers being someone else before the transformation, but he prefers his new self and treats his old self as someone to be forgotten or exploited. Nicole's clones are not a hive mind; each is a separate individual with his own unique perspective. Clones cannot create more clones, only the original Nicole has this ability, although the clones are very inclined to find more people suitable for transformation and will bring them to the original Nicole for cloning.

If any clone sleeps within close proximity of the original Nicole while he sleeps, their minds 'sync' - newly created memories are simplified and shared among all sleeping Nicoles. This allows the original Nicole to gain new skills and knowledge that his clones gather. If a clone goes too long without syncing with the original, unexpected mental side effects may appear.

Nicole's clone transformation is permanent (it does not wear off), but not irreversible (it can be undone or escaped with outside effort).

Nicole was a randomly generated character intended to appear once in Concession, but soon was integrated into the main cast, acting as a mischievous trouble maker.