Stephan is a 3rd generation C-Type android built by the Varo Robotics company, designed to resemble a male mouse.

His synthetic body is designed to be modular, meaning much of his anatomy can be changed and swapped with different parts. 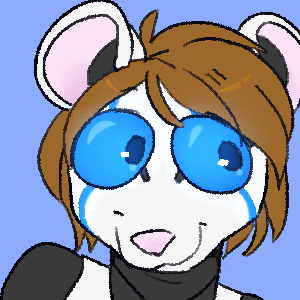 With Petra's help, Stephan has access to several programming routines illegal for androids outside the military field, including several combat programs and cyber warfare suites. The android is also equipped with various routines for cooking and machine repair.

Many A.I. citizens have developed methods of creating original art despite some of the limitations inherit to their synthetic intelligence. Stephan's approach involves the creation of procedural generated geometric landscapes, rendered with different artistic features and either 3d printed or recreated with real media.

Stephan was originally designed by bodyoftemptation and was bought as an adoptable. He then received an updated design to be more overtly robotic.