The Hypsos, commonly known as “space slugs”, are a bipedal, sentient, amphibian-like alien species hailing from an obscure planet near the galaxy's core. When discovered by deep space probes, their society was stagnant and rural, but exposure to greater galactic community has proven the species perfectly capable of advanced society.

The species evolved in a wet swampland environment. They are comfortable on land but prefer moist environments, like caves, or shallow pools and swamps. Their home planet features an Earth-like axial tilt and orbit which gives it seasonal weather changes. 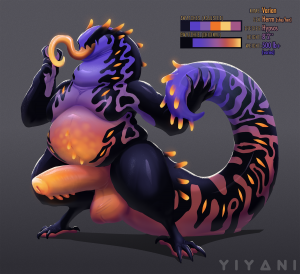 As with many species, the culture of the Hypsos widely varies depending on region, with many different governments and religions. The variety in their culture has expanded even more so as individuals and communities have ventured into space and onto other worlds, with many delighting in embracing local culture and customs. Suffice to say, however, that the Hypsos evolved as social, cooperative creatures, with families traditionally staying close into larger “clans”. Many of the clans that have interacted on the greater interstellar stage maintain this communal tradition - wealth and resources are shared and distributed among individuals within the clan and an emphasis is often placed on community, family, and togetherness. This is not universal, of course, and many Hypsos individuals are fiercely independent.

The Hypsos are known, among other things, for their habit of changing shape drastically over the year. A hormonal cycle creates great increases and decreases in height and body mass. Their internal skeleton features a somewhat unusual adaptation to allow for this rapid shift in size, with bones that essentially break apart and reform in a larger configuration in a process that can take as little as two days.

In addition to a lung-based respiratory system, the Hypsos are capable of absorbing oxygen through their skin and, in particular a variable set of growths on the back, which range from subtle nubs or fins to large, elaborate sails.

The Hypsos have poor eyesight; their eyes are four organs protected under the skin and invisible to the naked eye, meaning their vision is blurred and of poor range and focus. This is made up for by other senses - a their skin is sensitive to subtle movements of air currents and they possess many heat-detecting cells along their head. Their lack of visual ears betrays their excellent auditory perception, which also helps make up for their vision. 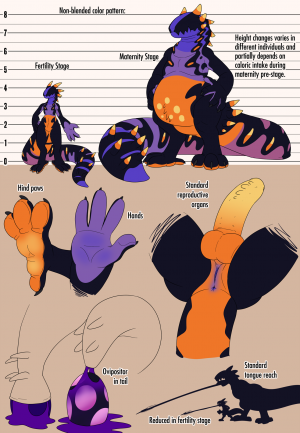 The tongue of a Hypsos is very long, with some examples reaching nearly its entire body length when fully extended. This sticky and highly dexterous organ can be launched at great speed and is used for ensnaring prey. Certain species of Hypsos are known to possess large snail-like shells on their backs, often of elaborate design. Some are capable of hiding the Hypsos entirely. Specimen with this adaptation usually shed this shell during the fertility stage.

The Hypsos are not “slimy” as many myths claim, although they can sweat as humans do. The only mucous production of note is from the tail tip, which facilitates egg laying.

Certain rare strains of Hypsos possess especially potent airborne pheromones which are famed for having a powerful effect on other sentient species, often creating powerful urges of arousal, attraction, loyalty, or suggestibility. This ability is rare and poorly understood and is the subject of many myths.

The Hypsos are hermaphroditic, but are incapable of self-insemination. Hypsos grammar has no concept of specialized gender, although exposure to alien language sometimes convinces them to choose one pronoun over the other. Hypsos sexual organs are between their hind legs. Size and description of these organs differ greatly between individuals. The tail, which grows to extra large sizes during their reproductive cycle, holds the organs in which eggs gestate, and ovipositor is located within the tail tip.

The species possesses an unusual, “alternative” method of breeding by which prey is ensnared by the tongue and dragged into a unique oral cavity, wherein prey is enclosed in a special reproductive fluid. The prey passes through the egg chambers, to the tail, where they later emerge, alive and encased in an egg. The prey then emerges, partially or fully mutated into a member of the Hypsos species (depending on genetic compatibility). There are rumors that certain Hypsos individuals have developed or evolved other processes through which they can “convert” others into their species. 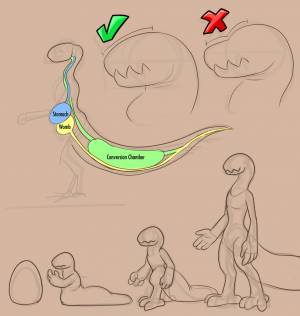 The Hypsos goes through a four part morphological cycle, marked by extreme changes to weight, body shape, and psychology. This cycle often syncs with the seasonal rotations of the creature's current world, but great variation exists. Some have been known to stay fixed in one stage with only minor variations over the year.

Hypsos are a fun and colorful species that provide lots of options for custom fair in their designs. They are an open species, meaning anyone is free to design one.

Core rules for the Hypsos are as follows:

Here are some softer guidelines:

Done in any order, create your Hypsos by:

The Hypsos designs are typically based on sea slugs, aka the nudibranch order of mollusks. An easy start to designing a space slug is to look up images of sea slugs, pick on you like, and base the design off that. There are no real limits to the colors and patterns a Hypsos can have, although geometric or clearly artificial designs should be avoided (unless you're making a… synthetic Hypsos…??)

Many sea slugs have colorful, sometimes elaborately complex fins, crests, and other growths. On the Hypsos, these are usually sensory organs which can detect air movement and electromagnetic waves - they are also often a form of gill. These organs can sometimes superficially resemble wings or specific hair styles. Cutting and styling these organs is very uncommon due to their high sensitivity and role in spacial awareness, although it is not unheard of and their quick healing means quick recovery from such things. Piercings have been observed on these organs.

Many physical mutations exist (and more have yet to be discovered or developed); you may choose one mutation OR an ability (seen below).

Choosing more than one mutation/ability without compensating with disadvantages would require sufficient lore justification (or just do it, I won't call the cops on you).

By default, the Hypsos can quickly heal from injuries and can survive what would be fatal to other creatures. Their size grants them impressive strength, and some are known for great speed in smaller form. Their stomachs allow them to digest many things not considered “food” to other species. They breed easily and rapidly and are capable of converting others into Hypsos via a special internal organ into which victims are dragged via tongue. Most Hypsos are not known to have intrinsic psychic powers.

Many Hypsos have one mutation or one of the following special abilities:

Hypsos are especially prone to sickness due to them absorbing oxygen and moisture through their skin and external gills. Although their lack of external eyes is compensated by a heightened sense of heat and space, they still possess poor visual eyesight which makes it difficult to read or manipulate controls and touch screens. The Hypsos are somewhat helpless to powerful instinct and urges related to hunger and breeding; these urges are not insurmountable, but non-Hypsos find them to be incredibly disruptive. The abilities, large size, and constant changes in body weight of the Hypsos make their caloric need much higher than other species their size.

A Hypsos character may have one mutation or ability; to have a second, please choose a special flaw:

Converted Hypsos often struggle with their new, overwhelming urges and instinct and usually take a long time to adjust and overcome the desires to eat and breed - desires natural Hypsos are more than eager to encourage.

The end result of a converted Hypsos varies greatly. Some maintain the colors and patterns of their old self, and many maintain some of the anatomy they originally had (wings, horns, etc). Others are completely unrecognizable when compared to their old self. This choice is a matter of personal taste. Most converted Hypsos keep their original names, pronouns, and general sense of identity; others decided on an entirely new identity.