Marigold is a farmer who lives in Eureka Springs, a rural farming area west of King City. She is frequently found visiting King City and spending time with her brother, Tyras.

She and Tyras were separated at a young age as a result of their parents' divorce. As Marigold was taken to a less industrialized area, communication was sparse until adulthood. Upon meeting for the first time in over ten years, Tyras found who had once been his brother had transitioned from male to female. 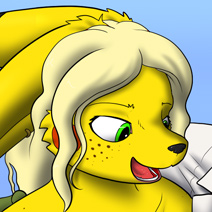